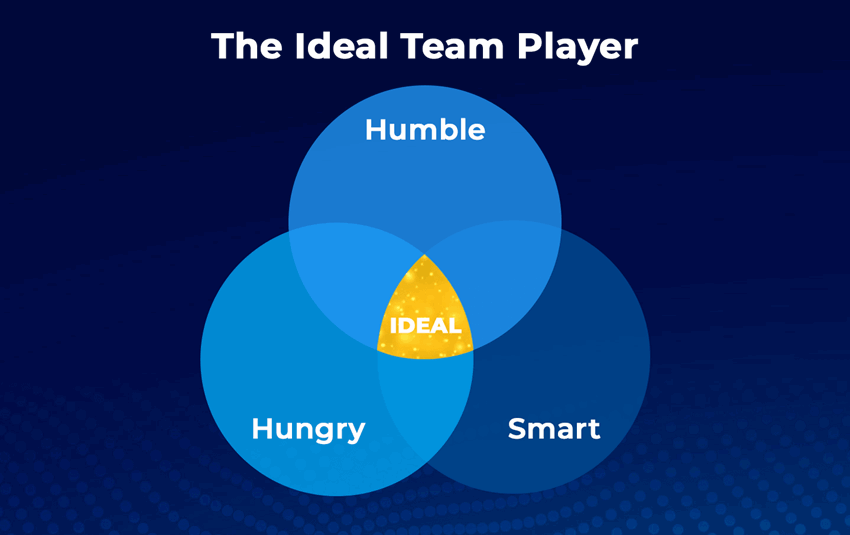 Building the perfect team of high-performing individuals is one of the biggest challenges for every business. I learned a lot on this subject from an interesting experience I had while visiting a potential client the other day.

This potential client was interested in our staffing services and I wanted to better understand the types of candidates his company was interested in hiring, so I scheduled a time to chat with him casually in his office. I asked what his ideal employee looks like during the interview, in response he grabbed the one of the books stacked on the room’s coffee table and said, "This! This is what our team members need to look like." The gray-covered book was titled The Ideal Team Player by Patrick Lencioni, whose name I recognized. I'd read two of Lencioni's books in the past, including The Five Dysfunctions of a Team and Getting Naked. I was excited to hear more about a possible third interesting read. He then said, "The types of employees we're interested in hiring are Humble, Hungry, and Smart."

The single most important characteristic of the ideal team player is humility. Humble players are willing to sacrifice the self for the team’s betterment. A humble person is willing to let others share in taking credit for a job well done, and is willing to accept criticism without deflecting blame when things go wrong. Humble players build up those around them and experience genuine joy in the success of other team members. They never boast about their own skills, but they aren’t afraid to acknowledge them.

Interestingly, individuals who are not humble manifest it in two generally opposing ways, though both point to a lack of self-confidence. Some manifest their lack of humility through elevating their own needs above those of the team by publicly spotlighting themselves, soliciting praise, talking over others, bragging about accomplishments, and dominating conversations. Others shirk responsibility, rarely take initiative, run from the spotlight, and keep to themselves.

Hungry individuals work hard and are willing to do whatever it takes to help the team achieve. They are self-starters who navigate hurdles instead of declaring themselves stumped. They autonomously find and fill gaps instead of needing to be commanded in all things. They thirst for learning and are eager for feedback. Hungry team members don’t sit idle, but look for ways to progress.

Non-hungry team members are full of excuses. They don’t hit deadlines, show up late, aren’t willing to put in the required effort, and are happy to waste time on extended breaks/lunches or endless office chit-chat. They profess to be “busy” all the time, but lack focus and spend time on lower-priority tasks.

Individuals who are classified as Smart by Lencioni are wise in their dealings with people. They understand how to deliver sensitive feedback in a way that will build and elevate others. Smart people know when to trust teammates and how to hold them accountable at the same time. They understand the nuances of individual and team dynamics and deal with people effectively in most situations. Smart people know that being “right” all the time isn’t the most important and don’t always demand they get their way. They also know when to stand firm on a decision and how to do it without ruffling everyone’s feathers. Smart people understand, and empathize with, other people admirably.

Non-smart individuals sometimes are abrasive, lack empathy, can’t trust others, prefer to work in their own silo, exhibit passive-aggressive behaviors, “tease” with sarcasm, criticize others openly, and don’t mind stepping on those around them to get what they want. The worst offenders sometimes don’t even realize they’re exhibiting any of those behaviors. They are cancerous to teams, often sucking the life out of teammates, and can cause great amounts of contention and discord.

According to Lencioni, “Most teams that struggle are not lacking in knowledge or competence as much as they are unable to access that knowledge and competence because of dysfunctional behaviors.”

Now that you know what to look for in job candidates and existing team members, it’s up to you to stay disciplined and to hold yourself accountable for only hiring and/or keeping around ideal team players. You can make a huge difference by making sure leadership at your company understands the importance of selective hiring, and that they fully embrace the culture change. The effort is worth it.

Humble, Hungry, and Smart can be learned. If a person is willing, they can acquire and develop them into their own personality. It’s important that management remains consistent in reinforcing good behavior and calling out the bad. If you’re up-front with job candidates and existing employees about your desire to truly embrace Humble, Hungry, and Smart, those that aren’t willing to change will usually self-select themselves out of the company.

Without knowing the recipe described in Lencioni’s book, we’ve been filtering and hiring candidates based on very similar criteria. We hire people that are willing and eager to learn. They don’t act like know-it-alls (even if they do). They know when to bury their ego for the common good, and they interact well with others. We miss out on seemingly good candidates sometimes because the process isn’t fast or immediate, but that’s ok. We’d rather be safe than sorry.

You will reap tangible rewards for sticking to your guns and carefully evaluating individuals for Humble, Hungry, and Smart. Now go build your dream team.